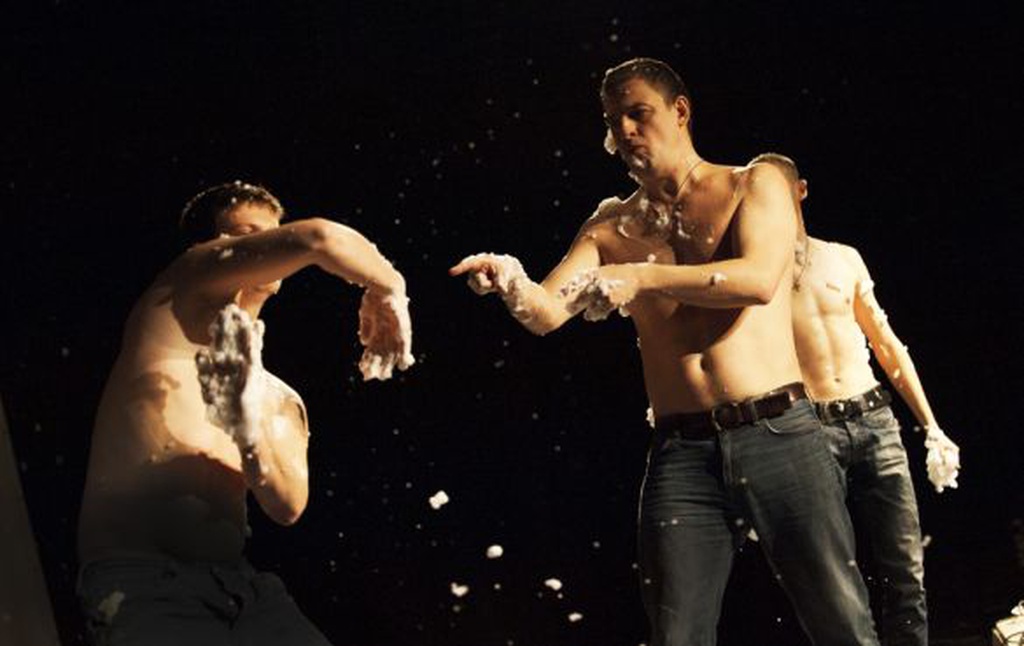 "Two in Your House" is the latest political act mounted by the folks who tirelessly bring us slices of theatricalized contemporary life at Teatr.doc.

Written by Yelena Gremina and directed by Mikhail Ugarov and Talgat Batalov, it is something of a sequel to Gremina's "One Hour Eighteen," which explored the death of attorney Sergei Magnitsky while he was in prison in 2009. In "Two in Your House," Gremina again seized on a controversial topic pulled from the headlines to draw conclusions exceeding the boundaries of the original event.

Here she focuses on the house arrest of Belarussian poet and novelist Vladimir Neklyayev, which followed his unsuccessful attempt to challenge sitting President Alexander Lukashenko just over a year ago. The December 2010 election was widely perceived by the international community to be rigged. Within days of Lukashenko's declared victory, seven of the president's nine challengers were arrested. Some, like Neklyayev, were beaten severely.

As in "One Hour Eighteen," Gremina deeply underplays her topic's drama, presenting an often lighthearted look at the bumbling stupidity that can lie behind even the most serious events.

The hardwood floors at Teatr.doc are scrubbed as never before. Entirely covering the theater's famous grungy, black wall is a huge, colorful canvas bearing a diagram of an apartment one might find in a real estate ad. The illustrated apartment has a bedroom with a bed covered in a pretty yellow blanket, a living room with a two-seater sofa featuring decorative pillows, a spic-and-span kitchen and a bathroom. On stage seven chairs face the audience. The actors move among the chairs depending on which room they occupy at the moment.

The action takes place after Neklyayev (Maksym Kurochkin) is released from prison and held under house arrest pending his trial. A revolving team of three KGB guards (Alexei Maslodudov, Talgat Batalov and Sergei Ovchinnikov) occupy the home with him and his wife Olga (Valeria Surkova) at all times. Neklyayev is not allowed to close doors, even when using the bathroom.

Gremina highlights the absurdity of the situation immediately. A guard reads the Neklyayevs the conditions of their arrest after which the husband and wife plunge into a conversation about Olga's extraordinary ability to discipline cats. The significance of this jocular talk becomes clear as the usually even-keeled Olga takes it upon herself to "discipline" the official intruders into her life — she smilingly makes them watch soap operas when they want to watch soccer, she happily turns up the music when they ask her to turn it down and, in a moment of utter despair, she attacks them furiously, smashing plates on the floor as the shocked guards huddle in a corner.

The guards are almost always on their best behavior — when they drink on the job they do it surreptitiously — and one even begins to sympathize with Neklyayev. That doesn't stop him from grabbing the poet in a headlock and dragging him away from the door when Neklyayev forgets he is not to approach the exit of the apartment.

These men are just doing their job — that's what they say and it's what Neklyayev says too when his wife loses patience with them.

"Oh, so they have no choice?" she asks sardonically. "You said everyone has a choice when you ran for president."

"That's different," he mutters inconclusively but with a certain amount of conviction.

It was a shrewd decision to cast Kurochkin, a highly respected playwright, in the role of Neklyayev. The writer brings authority to his character but also has the advantage of looking comfortably out of place on stage, just as Neklyayev surely felt as a prisoner in his own home. When Kurochkin-as-Neklyayev delivers a monologue about having failed as an activist, you sense the helplessness a writer experiences when smacked up against political chicanery.

Neklyayev and his wife win this particular battle, however. He is unexpectedly given a suspended sentence of two years and the pair returns home to kick the KGB out of their home. But Olga demands that they clean up first, setting off a ritual dance that may suggest celebration, or, more likely, suggests that the KGB is not finished with this couple yet.

"Two in Your House" strikes me as a paratheatrical event, a satire using theatrical devices to drive home a political point. As the presidential election approaches in Russia, this show comes across as a breath of fresh air and, perhaps, a low-key warning.