Fo's Tale of Half Putin, Half Berlusconi at Teatr.doc 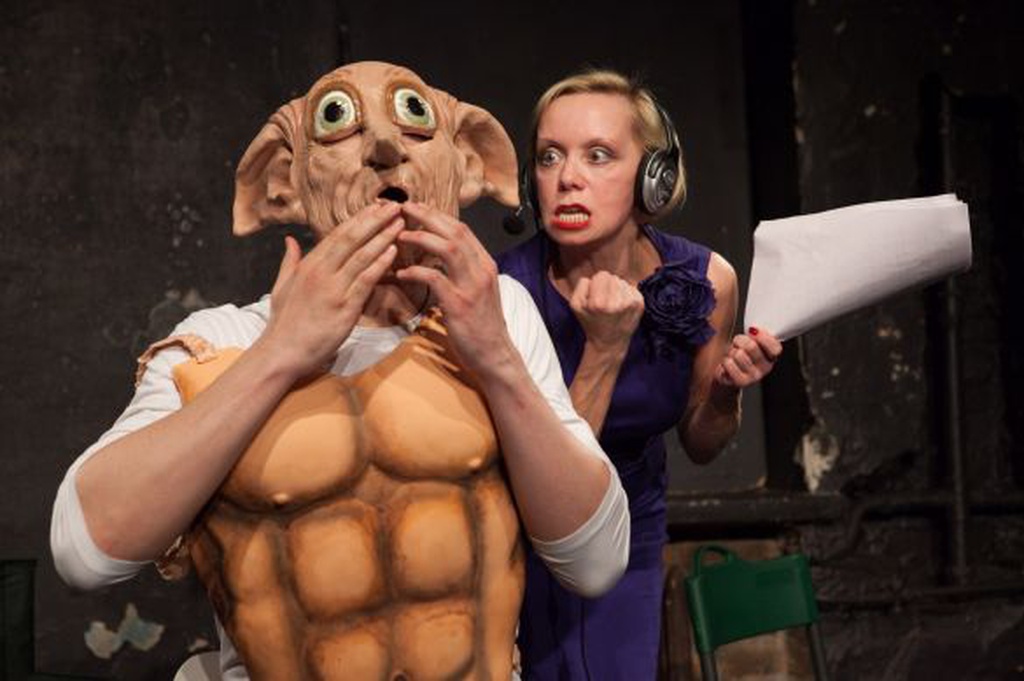 It doesn't matter if you don't like politics. I know. I, too, would rather sink away into a world of theater and art — that is, a place that makes sense.

But, as Russia's presidential election looms large on the horizon, escapism is not a possibility.

Anyone who knows Moscow theater can generally guess my next sentence. Something about a new show at Teatr.doc, the basement playhouse that made the words "politics" and "theater" synonymous. Indeed, I am writing today about Doc's "BerlusPutin," Varvara Faer's adaptation of Nobel Prize-winning author Dario Fo's recent political satire "The Two-Headed Anomaly."

But bear with me as I take a short detour. It's important.

Some 22 years ago Moscow theater was in crisis. Spectators were staying home. Theaters were not "empty" as it's become customary to say, but they weren't full. I sat in auditoriums where you could stretch across a row of seats and catch a good nap if necessary.

The reason was politics. Gorbachev vs. Sakharov. Myth vs. truth. History vs. reality. It all played out on television and the nation was transfixed by the extraordinary changes. The thrusts and parries. The accusations and defenses. What theater, as the cliche now goes, could compete with reality?

Well, as half a nation rises against Prime Minister Vladimir Putin's status quo and the other half rises up in his defense, we are back to a situation reminiscent of, though not equivalent to, the late 1980s and early '90s. One difference, however, is that people are not glued to television sets, which hip Russians now call "zombieboxes"; they are glued to the computer and all the free-fall information that particular box provides.

There is another difference. Frankly, it's called Teatr.doc. And this theater, like most in town I should add in fairness, packs in crowds every night. The Internet isn't television, which — unless you record — you must stay home to watch at specific times.

But there's another reason for this phenomenon — Doc serves up politics in challenging, usually funny doses. It's a place you can have your thoughts provoked while having a good laugh.

"BerlusPutin" may not be as funny as it could have been, although Fo's premise is raucously rude.

Former Italian leader Silvio Berlusconi visits his friend Putin. He's murdered by terrorists and when Putin rushes in to save the day, he is shot, too. But in each man half a brain is still alive. Italian doctors do the best they can — replace the dead half of Putin's brain with the living half of Berlusconi's.

This is theater, however, and that's all a bluff. In fact, there are several bluffs, the final of which I won't divulge. Suffice it to say we witness a film director (Sergei Yepishev) rehearsing with an actress (Yevdokia Germanova) whose job is to play Putin's wife Lyudmila in a movie about the Putin-Berlusconi hybrid.

The political satire kicks in slowly as early scenes focus on the cliche of actor-director relationships and Putin's relationship with Lyudmila. Germanova vamps wonderfully as the star who is constantly worried about her lipstick, her dress and which angle the camera is shooting her from. Yepishev is properly voracious as the grinning maniac who will stop at nothing to get an actress to perform.

As the two begin rehearsing scenes based on the premise of the plot, the separation between fact and fiction begin to blur.

The worried actress wonders if they can spoof Putin without Putin's permission. She claims to love the Russian leader but admits she is unhappy with his leadership. The director wonders aloud if the actress is a plant from Putin's organization, yet continues badgering her into playing her role.

In the funniest scene, the director as half-lobotomized Putin dons a strongman suit and addresses the Duma, urging politicians to be more sensitive and forgive him his transgressions. Shown on a back wall by video projection, this segment employs documentary footage of politicians laughing and mocking the speaker.

In one wicked moment, Putin appears as Dobby, the house elf character in the Harry Potter movies, who bloggers have said he resembles. During an electric shock treatment his Botox injections dripped down his face.

I came away from "BerlusPutin" with two basic thoughts. One was that theater will always have difficulty competing with dramatic current events. There's a reason people stayed home 20 years ago. The real thing does beat imitation.

The other thought was, thank God for Teatr.doc, which has the nerve and talent to lure us into a packed house and make us think hard about the world instead of lulling us to sleep.