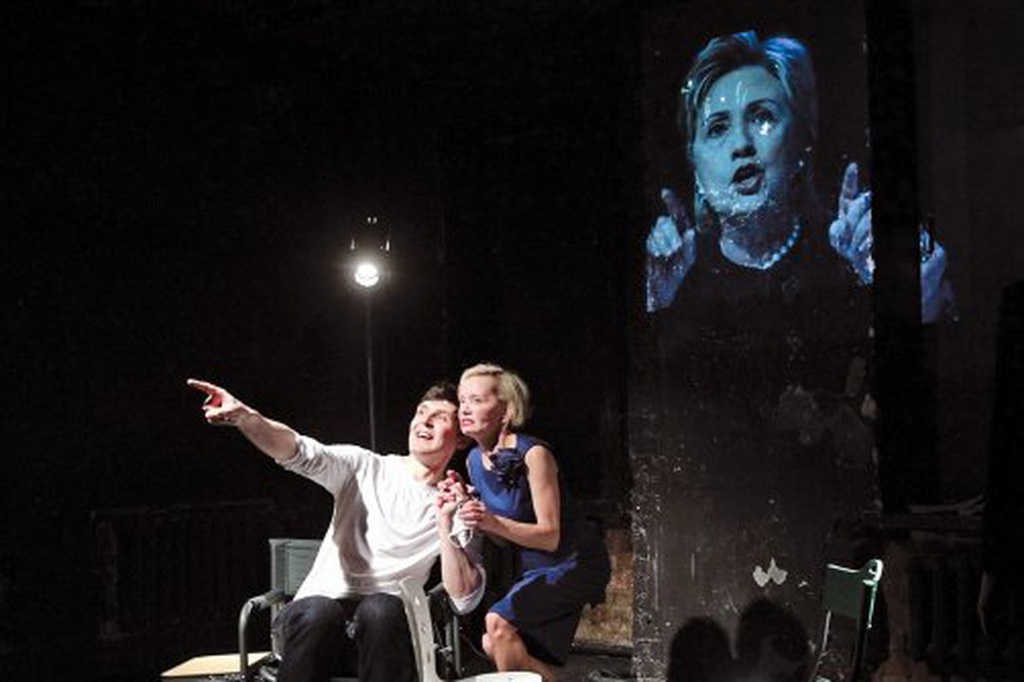 Russia’s semi-underground theater troupe Teatr.doc is playing a prominent role in the country’s opposition politics these days, even though their plays are practically impossible to find. The theater’s black-box makeshift stage lies hidden in a basement, less than a mile away from the Kremlin. It barely fits a hundred spectators a night, and more than half of the audience must sit on the floor. It’s also highly secretive: no posters advertise Doc’s plays on Moscow’s streets, and the only way to learn about the troupe is to search the Internet. Yet the audiences still crowd in to watch a rotating program of performances tackling contemporary Russian life in all its grittiness.

For the past decade, the theater’s founders, Yelena Gremina and Mikhail Ugarov, had been committed to avoiding politics in favor of acute social issues. Their plays portrayed Russian citizens indifferent to the Beslan school-hostage siege, a female prisoner who had killed her husband out of unrequited love, young people with HIV/AIDS who felt like outcasts. The scripts mirrored reality in Russia, but never broadcast a playwright’s political views. But last week, the moment arrived for the theater to stop being so neutral.

On a chilly Monday night, the troupe ventured out of its basement to perform fragments of a play called BerlusPutin before an audience of protesters in a Moscow park. The play, a version of Italian dramatist Dario Fo’s L’Anomalo Bicefalo (“The Two-Headed Anatomy”), focuses on the country’s once-and-future president, Vladimir Putin, and his buddy Silvio Berlusconi, the buffoonish former leader of Italy.

In the play’s beginning, the two men come under terrorist attack; Berlusconi dies and Putin survives. Italian surgeons fuse Berlusconi’s brain on Putin’s, with the result that Putin doesn’t have any memories of his political sins and must rediscover them.

The play, adapted by Varvara Faer, takes on some of the most scandalous rumors swirling around the Putin regime, such as the riddle of Putin’s missing wife, Lyudmila. Putin’s partner of 28 years rarely appears in public and is thought to be living as a hermit in a monastery north of Pskov; meanwhile, Putin’s rumored lover, former gymnast Alina Kabayeva, is now a member of Parliament and reportedly the de facto first lady. The play also mocks Putin for his reported Botox treatments, his penchant shirtless photo ops, and his alleged tolerance of widespread corruption.

While the play is packed with jokes, it also contains some dark political commentary. After the brain implant, surgeons bring the new, kinder Putin to his wife’s monastery cell so she can refresh his memory about his rule. Ashamed of Lyudmila’s tales, and of what a “blood sucker” he was, Putin begs his wife to stop talking and have sex with him instead. “You will not be able to rape me, for I am not Russia!” Lyudmila yells in response. (The actress who plays Putin’s wife, Yevdokiya Germanova, credits the play with her own political awakening, saying it inspired her to join the crowds battling the riot police to protest Putin’s inauguration this month.)

Not surprising, Fo’s play is seen as a “troublemaker” by most theaters in Russia and they flatly refuse to stage the work, says theater and film director Ivan Vyrypayev. But, Vyrypayev says, Putin has no idea that Teatr.doc exists, so their recent performance in the park escaped a Kremlin crackdown.

Back in the black-box basement, Doc’s founders say they are committed to staging more politically incendiary fare. In one reading last winter, actors recited a transcript, recorded by federal security services in 2009 and leaked to Doc by a newspaper editor, of Russian nationalists plotting to murder human-rights activist Stanislav Markelov. Another new play by Gremina, One Hour Eighteen Minutes, chronicles the death of Sergey Magnitsky, a lawyer who was in the process of exposing a massive theft by Russian officials and who was denied medical care in prison. (The title refers to the amount of time it took Magnitsky to die.) Gremina says she will continue performing the play until those responsible for Magnitsky’s death are convicted.

Meanwhile, a day after BerlusPutin was performed, riot police cleared the park of protesters, who have yet to return.