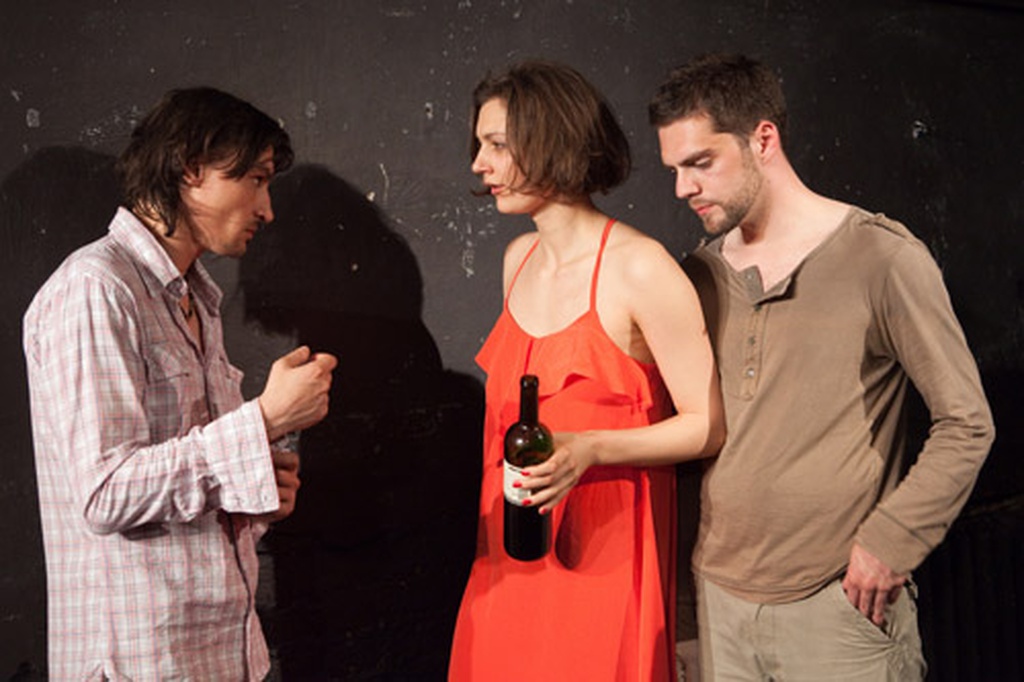 Throughout its 10 years of existence, Teatr.doc has tirelessly championed the cause of contemporary Russian drama. It has discovered and developed more new Russian playwrights than you can shake a stick at, to borrow a phrase from an old friend.

What it hasn't done often is explore new plays from other countries. That makes Mikhail Ugarov's production of Gibran Ramirez Portela's "Alaska" an interesting exception. This is the first production in Russia of work by the Mexican playwright and screenwriter.

It's pretty easy to see what attracted Ugarov to this play. Portela's language and situations are stark and simple, very much in the vein of writing that Teatr.doc has favored over the years. Two men and one woman compete for emotional position in a small, shared space. Each is locked into his or her own pain or complexes, each making clumsy efforts to break out of isolation. Especially the men, of course.

There is no set and virtually no props in this ultraminimalist production, nothing but three actors on a bare stage armed with their personalities and a writer's words. If this looks like any number of other shows you have seen at Teatr.doc, that is because Ugarov is sticking close to an aesthetic that he knows and trusts.

Jimmy (Vladimir Bagramov) is the owner of a store selling safes, but he is also something of a psychological thug. He is struggling to maintain control over his friend Miguel (Pavel Mamonov), with whom he worked on a fishing boat in Alaska and who now works for him as a floor salesman. Old ties and allegiances begin to crack and crumble when Martina (Irina Vilkova) one day walks into the store and plants a juicy kiss on the unsuspecting Miguel's mouth.

Portela keeps us in the dark about the underlying facts of the three biographies that bring us to the few moments of interaction that we witness. There is something about Miguel having a wife and child that he returned from Alaska to rejoin – but never did. There was some dark incident that occurred in Alaska that Jimmy lords over Miguel and uses to drive a wedge between Miguel and Martina. One thing is certain – something binds these two men tightly enough for Martina to mock Jimmy as Miguel's "jealous wife."

As for Martina, what do we know besides the fact that she smells of insect repellant and that her grandmother used to call her a whore? True, she adds, her grandmother called everybody a whore, female and male, so it's hardly something she can wear as a badge of honor.

Vilkova's Martina is a sight to behold, constantly scratching her back or her leg, always ready to go nose-to-nose or toe-to-toe with Miguel or Jimmy. Sexy and boyish at the same time, she is a hothead and a loose cannon with a heart of gold. She is also very wise and emerges as a measure of character for the two men she encounters. She is no angel, but she is trusting to a flaw. It is, to some extent, her trust in Miguel that brings tragedy on them both.

At first, Bagramov's Jimmy comes across as an archetypal 1930s Hollywood sleaze. His dark, steely eyes constantly play off the condescending smirk on his lips. When he is in control of Miguel, he is king of his little roost. All it takes for him to begin cracking is to lose grip just a little. In fact, the swagger is a theatrical cover for his vulnerability. The one constant he possesses, however, is his penchant for cruelty.

As Miguel, Mamonov has the task of playing the essence of change and doubt. His is a soul in turmoil. Suspicious of the confidence Martina provides him, he blossoms in the warmth of her embraces. What he cannot do, however, is overcome his own nature. He insists that Martina ask no questions about his past – a request she loyally honors – but then drives himself to distraction by trying to figure out what she keeps in the safe she bought the day they met.

That safe, of course, is a symbol. It is, like a heart, a vessel that holds something of value. Also like a heart, it cannot be violated without consequences.

"Alaska" is the story of three hearts – what they are capable of feeling and forgiving. Feeling is something every heart does by instinct. Forgiveness, though, requires will and wisdom. Not everyone's heart is capable of that.