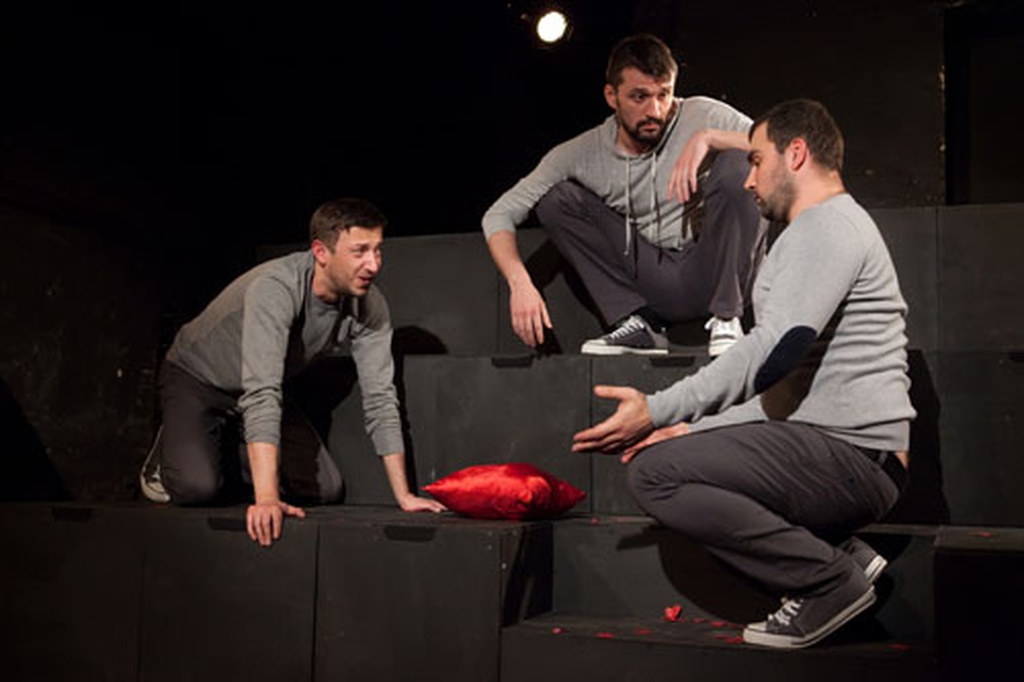 "Nine Months/40 Weeks" is one of those projects that could only happen at Teatr.doc.

OK, so the idea of men playing women is hardly new. Shakespeare did it. But although the men-playing-women thing here is important, that is not what makes this production unique.

The whole idea of this show — its manner of conception and performance, its assumptions, its method of communication with the audience — all of that is pure Teatr.doc. You couldn't find a show like this at another Moscow theater if you went out armed with industrial flashlights, a magnifying glass and GPS.

Written and directed by Alexei Kulichkov and Sergei Shevchenko, it observes six women encountering the joys and surprises of pregnancy at a Russian "roddom," that is, a maternity ward or clinic. All the characters are women — the mothers and the head nurse — and all are played with great affection by men.

The text for the play was drawn from interviews conducted with young mothers, and it was developed over the last two years in workshops at Teatr.doc, including the most recent running of the Lyubimovka Festival in September.

The men playing the women make no effort whatsoever to convince us that they are women: no vocal mannerisms, no gestures, no costumes, no anything of that nature. Seven men in gray shirts and jeans, looking very much like men, with their mustaches and beards, simply take on the personas of various mothers-to-be.

There is a VIP mom (Alexei Chernykh), a first-time mom (Sergei Shevchenko), second-time mom (Ilya Barabanov) and multiple-time mom (Sergei Fisher). There is one mom who got pregnant by mistake (Mikhail Rudenko), and there is another mom (Yevgeny Antropov) who is unable to give birth but paid a surrogate to do the job for her. Lording over them all is the crusty, experienced mother and maternity nurse (Alexander Userdin), who runs her ward like a cross between a prison and military barracks.

The show begins in a low key, with the nurse engaging the audience in a bit of chat. She then introduces the mothers, and we rather feel that we unsuspectingly have found our way into a meeting of Alcoholics Anonymous or some such support group. Each mother stands and identifies herself and her reason for being here in the maternity ward.

All of this is very endearing: The self-controlled, mustachioed men playing nervous women, sharing personal stories and occasionally appealing to individual audience members for their own stories. The night I attended there was a woman present who was in her seventh week of pregnancy. "I wish you the best of luck," Userdin-as-nurse wished her quite sincerely.

Of course, that was before we saw the nurse abusing and ridiculing the hapless mothers coming into her fiefdom at the clinic.

But beyond a story about pregnancy and birth, "Nine Months/40 Weeks" attempts to have its say about some current sociological phenomena.

The VIP mother is a representative of Moscow's nouveau riche class. The multiple-time mom is just the opposite. She may or may not have a resident permit and therefore is scorned by the nurse. The mom-by-mistake is a nod to the youth culture, in which apparently the notion of personal responsibility has not yet taken hold.

For the record, I'll say this: This young woman who comes for an abortion is the first to give birth. What I won't say is how that event is depicted. It's one of the most effective moments in the show, funny, unexpected and quite beautiful in its own way.

The story involving this character in some way highlights the strengths and weaknesses of this show.

We are not privy to what makes a headstrong young woman intent on having an abortion change her mind and give birth. That is merely presented as a fact, as are most of the other sociological aspects of the show: discrimination against outsiders and nonethnic Russians, obeisance before money and power. The nurse obsequiously takes a phone call from PresidentVladimir Putin, who wants to know if the nation's population is growing. These themes are not explored or developed in any way.

What does work well is the theatrical element, the act of performing these various women's tales. Kulichkov and Shevchenko keep the action moving quickly and do an excellent job of building character.

"Nine Months/40 Weeks" is clever, thoroughly enjoyable entertainment on an unusual topic presented in an unexpected way and acted with humor and sensitivity.